Former CEO of Microsoft Canada, Mr Frank Clegg :
“My industry is on a campaign to bury the science and to confuse the message on the harmful effects of wireless devices,” says Mr Clegg. “I’ve seen the tremendous benefits that technology can provide. My concern is nobody can say that it’s safe.”

Dr Ken Karipidis, a spokesperson for ARPANSA (Australische Federal Government Agency) :
To my mind, “no evidence of established health risk,” is not the same as saying it’s safe. Sadly, guaranteeing safety is something not even our safety authority is willing to do.

Dr Devra Davis, epidemiologist:
“Millions of children are being exposed to something that has never been fully tested.” .. “We’re treating our children like lab rats in an experiment with no controls.”

Do mobile phones cause brain cancer?

This has been an ongoing debate for decades, but whenever someone asks this question, it’s usually met with scepticism and the debate is shunned. I used to react the same way. But once I started digging into the evidence, it became clear to me that the answer was much more complex than I had imagined.

There are over 6 billion mobile phone subscriptions worldwide, many of them smart phones, with Wi-Fi functionality. Since the widespread use of mobile phones, overall brain cancer rates have not increased and this is often used as proof that mobile phones are safe. But this is short sighted, mainly because brain cancer can take decades to develop and being also rare, it’s unlikely to show up easily in data from the general population. In fact, US statistics do show an increase in brain tumours in younger people.

Nowadays, it’s not just mobile phones that have a growing number of scientists concerned. There are also Wi-Fi enabled devices like laptops, tablets, even watches and other wireless gadgets, like baby monitors and game consoles. We place them close to our bodies or we give them to children to play with, not realising that these devices also emit the same type of radiation as mobile phones. On top of that, there are Wi-Fi networks, which blanket our homes, our schools and our cities with an artificial electrosmog. 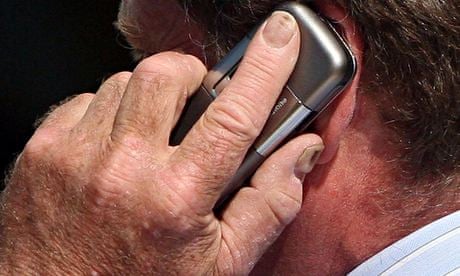 We now exist in a sea of radiofrequency (RF) radiation, never before seen in human history. The levels of artificial electromagnetic radiation have reportedly reached a quintillion (1018) times higher than the natural background levels.

In 2011, the International Agency for Research on Cancer (IARC) classified RF electromagnetic fields as a “possible human carcinogen”. Much of the evidence was based on studies showing an association between the development of glioma (a malignant brain tumour) and the longest use of wireless phones.

US cancer epidemiologist, Dr Devra Davis says, “We’ve gone from the equivalent of the horse and buggy to the jet in about 10 years.”

Dr Davis is highly credentialed. She was a senior scientist at the National Academy of Sciences, and a presidential appointee of the Clinton Administration and a member of the team awarded a Nobel Peace Prize with Al Gore in 2007. She has been campaigning for the safer use of Wi-Fi technology, especially in children.

Case in point. The Rudd Government’s “education revolution” has led to the roll out of Wi-Fi in public schools across the country. Yet there’s never been a single study looking at people’s long-term health risks of Wi-Fi exposure.

“Millions of children are being exposed to something that has never been fully tested,” says Dr Davis. “We’re treating our children like lab rats in an experiment with no controls.”

More and more parents are concerned about their children’s cumulative exposure to Wi-Fi, especially because children’s brains absorb twice as much radiation than adults.

“It’s almost a case of involuntary consent. Parents are sending their children to school to sit in a ‘possible’ human carcinogen,” one parent told me.

We have a federal agency responsible for protecting us against the harmful effects of radiation – the Australian Radiation Protection Nuclear and Safety Authority (ARPANSA). They rarely grant TV interviews, but on this occasion, they agreed to take part in my program.

“There is no established evidence that RF radiation from tablets and phones and Wi-Fi causes health effects,” says Dr Ken Karipidis, a spokesperson for ARPANSA.

It’s also the same position held by reputable authorities like the UK Royal College of Physicians, the Cancer Council of Australia as well as the industry body, Australian Mobile Telecommunications Association (AMTA).

To my mind, “no evidence of established health risk,” is not the same as saying it’s safe. Sadly, guaranteeing safety is something not even our safety authority is willing to do.

A petition to the WHO and UN has been signed by over 200 scientists in a bid to draw attention to what they perceive as a looming public health crisis. They say current safety standards aren’t protective enough. Some countries like Switzerland, Russia and China have 100 times more stringent standards than Australia.

Former CEO of Microsoft Canada, Mr Frank Clegg says we’ve been misled about the evidence. He has rare insight into the machinations of the technology industry.

“My industry is on a campaign to bury the science and to confuse the message on the harmful effects of wireless devices,” says Mr Clegg. “I’ve seen the tremendous benefits that technology can provide. My concern is nobody can say that it’s safe.”

Mr Clegg sets the scene, reminiscent of Big Tobacco in the 90s when the CEOs of major tobacco companies went in front of US congress and swore under oath that tobacco was not addictive.

The robust position of the Australia’s safety agency reminded me of the scene in the film Thank You For Not Smoking where the smooth talking character of Nick Naylor tells Telco executives: “Gentlemen, practise these words in front of the mirror. ‘Although we are constantly exploring the subject, currently there is no direct evidence that links cell phone usage to brain cancer.’”

Dr Davis says she has seen this before where industry is able to influence or delay the scientific evidence. Early in her career, she worked to ban smoking on planes. Her team showed that after an 8-hour flight, the smoking and non-smoking sections of the plane had the same amount of fine particulate pollution.

“We did that research in about 3 months. But it took 4 years to get a report out. The reason it took 4 years had nothing to do with the science at all. It was [the politics] and I’ve seen that repeated here,” says Dr Davis.

No-one is saying we shouldn’t use these devices. They have revolutionised our day-to-day life and we’ve become to depend on them. I’ve explored ways to use this technology more safely.

Dr Davis says we need to take a precautionary approach with Wi-Fi technology.

“What are we debating here?” says Dr Davis. “Do you really want to see proof that we’ve got millions of people with cancer, like we did with tobacco and asbestos? Is there any question we should have acted sooner?”

I still have these devices but I’ve changed the way I use them based on the evidence that I’ve uncovered. I’d rather take precautions in the absence of all the evidence rather than sticking my head in the sand.

This website is a Stevens ICT production.
Go to top